The Thousand Faces of
Dissociation

In our current era of collective trauma, mental health issues are becoming a part of daily conversation. In spite of this increased exposure to concepts of stress, trauma, anxiety and mental illness, many terms are misunderstood within our popular culture.

A few years ago my dear friend and counsellor colleague Dorion Dellabough, M.Ed., RCC (https://helpisinsight.com) shared his idea for a great book title “The Thousand Faces of Dissociation” to describe the nuances and continuum of this mental health phenomenon called dissociation. It is with his permission that I borrow his title today to share my experiences of the meaning, physiology and support for states of dissociation.

Dissociation is a complex neurological and psychological process that can happen to everyone in everyday life as a protective coping strategy. The purpose of this elegant aspect of human design is to allow us the possibility for disconnection from the outside world when we feel unsafe, stressed or threatened. Dissociation is a part of our survival brain’s software.

Dissociation can be subtle, daydreamy or a wandering of thinking. It can also be a part of being “in the zone” facilitating focused, creative thoughts to emerge, through the prioritization of the inner world in relation to the external environment. Watching the Olympics, it is observable that athletes in high pressure situations need to partially dissociate from the goings on around them in order to focus on their trained behaviours. This is also true for combat soldiers or first responders who set their emotions aside to concentrate and stay present to the high intensity demand of their occupations. Dissociation as it moves along the continuum can split from being functional in purpose, to interruptive in daily life. When infants are exposed to early-life traumas, neglect, abuse, or domestic violence as examples, they do not have the capacity for fight or flight; as their only remaining option dissociation becomes their default for protection.

If this pattern of self-protection is repeated over and over it becomes easier and easier to access this neural network, like a well-travelled highway, potentially resulting in a sensitized, over-reactive dissociative adaptation. Babies who frequently dissociate for self-protection are often perceived as calm; the disconnected aspect of their presentation is often misinterpreted. The developing brain of small children may also learn to disconnect in response to non-verbal cues of disgust, disapproval or a lack of affect in their caregivers’ emotional expressions. These contingent associations of relational threat resulting in disconnection can become a part of attachment circuitry where the child dissociates within the context of relationship. This early acquired neural programming can become a prevalent influence in future relationships across the lifespan. Dr. Bessel van der Kolk in his book “The Body Keeps the Score” describes dissociation as “the essence of trauma”. When dissociation occurs repeatedly across time, the person begins to feel floaty, separate from their body and disconnected from their feelings and reality.

In the brain, dissociation is currently understood to be a predominant parasympathetic state. Dr. Stephen Porges describes dissociation to be an aspect of the freeze stress response, which accesses the dorsal branch of the vagus nerve, slamming on the brakes of highly aroused sympathetic terror states. When the vagal brake slams on, the brain shuts down cortical functioning, fragmenting thinking and memory. Floods of adrenaline trigger this response, releasing opiates which are the body’s internal pharmacy of painkillers. Opiates numb both physical and emotional pain. When arousal from fear increases heart rate, dissociation serves to decrease the heart rate. When adrenaline sends blood to the muscles of the limbs, dissociation keeps blood in the trunk of the body (Winfrey and Perry, 2021). With repeated dissociation across time, areas of the brain such as the thalamus, insula and hippocampus shut down and degenerate. Sensory processing also becomes muted and fragmented.

Given the impact of continuous dissociation on the thalamus, intervention that supports the sensory systems and can aide individuals in the learning to re-inhabit their bodies safely. With accompanying experiences of safe and compassionate co-regulation, people can begin to develop a sense of dual awareness. Dual awareness is the ability to hold the mind both in the triggering dissociated space and in the other “okay” parts of their present reality simultaneously. Emphasis upon intentional proprioceptive input (accessing the mechanoreceptors and interstitial fibres), deep pressure, vibration, posturing in prone, compression through the joints and vestibular input as examples of sensory additions to an intervention process, the person can begin to feel their body as a safe sense of self.

As a somatic and Jungian oriented psychotherapist, Dorion’s book will no doubt help people gain insight into themselves, people who may consciously or unconsciously be suffering from an over-reliance on unhealthy dissociation. Through conscious connection as a collective, and transdisciplinary collaboration, we can all work towards the minimization of dissociation as an unconscious protection strategy. Conceivably, if dissociation were less required to help us feel safer around other people, a number of our strained relationships might regain a sense of connection and ease. And hopefully, people we care about will feel a little better about themselves and their place in the world.

An upcoming unique and incredible resource from a brilliant colleague:

HSP? Bothered by physical symptoms? Wellness Assessment Coming This Fall! I will be offering a personalized assessment of the link between HSP and your physical symptoms. Receive a written report including strategies to improve your health. Join my waitlist to be the first to receive this service.

Book I adored and dreaded finishing: 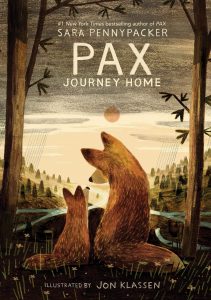 A song I have on repeat:

“Pax lay down shoulder to shoulder with the old fox, pressing tight in full company. He could offer only withness, but nothing else was asked.”